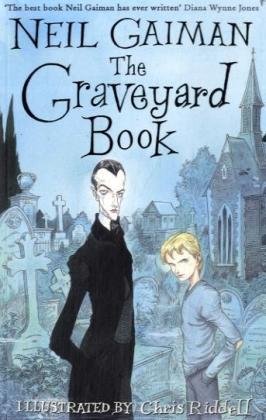 I read The Graveyard Book today (finally) and it has renewed my love for the incredibly imaginative and brilliant Mr Gaiman.

I have been reading Neil Gaiman’s blog for several years now. In fact, I started reading his blog long before I actually read any of his books, with the exception of paging through the beautiful Sandman graphic novels at friends houses and of course, Good Omens, which I read originally not because of the Gaiman name on the cover, but the Pratchett one instead. But yes, I have been reading his blog for several years now, and part of reading an author’s blog is that one has a small insight into whatever it is the author is working on at the time. When I started reading the Gaiman blog, it was just after the release of Anansi Boys, but this held no significance for me at the time. But, while Mr Gaiman was writing Graveyard book, I was already well acquainted with who he was and what his body of work looked like, and I took special notice of this book. And, while reading the book, I remembered the posts around the book, making it even more special.

The Graveyard Book is a dark but light-hearted tale for younglings that tells the story of young Nobody Owens, aka Bod, and his early years living in, well, a graveyard. The subject matter may be dark, and the first chapter details the fairly gruesome murder of Bod’s family (including his sister), which may put some sensitive readers off, but it is no darker than The Jungle Book, which The Graveyard Book is inspired by.

I read Stardust earlier this year, and was not as in love with it as others were, but luckily I had read it after American Gods and Anansi Boys: A Novel, so it did not do anything to lessen my love for things Gaiman. But, where Stardust failed (for me), The Graveyard Book not only restored my adoration for Mr Gaiman, but also increased his standing in my humble books. Additionally, this is now officially my favourite book for 2008.

I've always liked Gaiman too but not as much as I want to like him. There's something missing for me in his writing, although I'm not sure what it is. There's something that I feel he's not doing that could make his writing brilliant instead of just rather good. In the books I've read thus far, it often seems to me that he tails off towards the end.

I think I understand what you mean. That for me was particularly hard to swallow while reading Stardust. I recently picked up Neverwhere, and the little I have read so far has given me the same feeling too. Graveyard book, on the other hand, feels completely different.

I may give him another chance, then so. :)