On new things and travel plans

There has been great excitement in our household this week, for several reasons. Firstly, the husband started working on Monday, in a real job at a real company with a real salary.

This is important for so many reasons. Of course, the money is going to help tremendously. It will remove the pressure from me, as we can now easily afford not only paying for university, but also to save up money to travel and attend festivals and concerts and feed our hobbies. But, almost more importantly, it means the husband will feel like a productive human being again and get out and about. As glamourous as executive house husband sounds, I know it has also been a frustrating year for him at home with not much to do other than clean house and play games. For his own sanity and sense of self-worth, I am grateful this has come along.

Unfortunately, the husband’s bicycle was stolen at the station on Monday while he was at work, which did put a bit of a down spin on the mood in the house, but we quickly ordered him a replacement bicycle (thank you Amazon) and by Friday, he was independently mobile again

I also discovered this week that I have been putting away £50 a month into a savings benefit through work since I joined the team here in the UK, and it had accumulated into quite a nice little bundle. And, instead of being a fiscally responsible human and just leaving it alone, I decided to spend a chunk of it on a new Xbox One X for the house. In reality, what this has meant is that the husband, who plays predominantly in the sitting room, has been upgraded to the Xbox One X, and our original Xbox One that was there has moved up into the bedroom to replace my Xbox 360. The new beast arrived yesterday afternoon, so we are both grateful for the snowy weather outside forcing us indoors to play with new toys.

We have been looking at concerts and festivals this year, and have so far decided on seeing Epica in April, Ensiferum and Ex Deo in May and Powerwolf in November. These I will attend with the husband.

The kid and I are also looking at attending one day of Lollapalooza Paris this year. Neither of us have been to Paris before, and so we have decided to make a bit of a trip of this. As an art student, the kid is very interested in seeing the Louvre, and I really just want to go take a picture of the Eiffel Tower and have a pastry walking along the Seine. We are, of course, very aware of the fact that this is quite a thing, being able to plan a week-end away in Paris. It is certainly not something that was part of our world two years ago, and is one of the main reasons we chose the UK over Australia, New Zealand and the US for our new home country.

We are also planning a visit to South Africa later this year for my mother’s birthday. I am looking forward to seeing my mother again, as well as a few friends we have left behind.

As I mentioned, it is a little snowy outside again, which is simply glorious and beautiful to look at. This is a picture taken from our front door this morning: 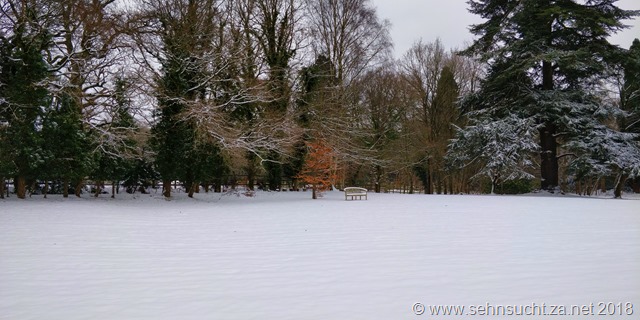