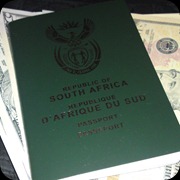 I am finally in Vegas. In fact, the first day of MMS is already over.

The flights here were horrible. Our first flight was from Johannesburg to Atlanta, and this flight was delayed by quite some time. Initially, it was delayed by an hour, which we were prepared for. This gave me more time with my family and friends who came to see me off at the airport. I should add though that I woke up at 2h30 that morning – not because I had to, but simply because I could no longer sleep. So, by the time I got to the airport, I had already been awake for 14 hours, and started to run on empty. Booking in was easy, boarding was a whole different story. It took forever. And then, once we were on the plane, some technical mishap happened, which delayed our flight even more. But now we were on the plane, seated and tucked, and could no longer move around. And we sat like that for almost two hours before take-off.

I wrote this while on the plane between Johannesburg and Atlanta:

I am severely sleep deprived. If the clock on my netbook and the inflight stats is anything to go by, I haven’t really had sleep in well over 24 hours. It is dark outside the plane.

It is 8:50 Sunday morning back home. I am somewhere over the ocean, approaching the Caribbean. According to the inflight stats is it now 2:50am in Atlanta, which is where this plane is headed. Our flight was delayed by well over 2 hours – which I think has added to my exhaustion.

The outside temperature is –47C. So glad I’m not out there. We have travelled 9577km already. We are travelling at a 19872 altitude and groundspeed of 820mk/h. This is considerably slower than the 927km/h we did a couple of hours ago. I have been in this plane for more than 12 hours already. 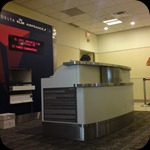 Things got worse after this. Because our flight was delayed so much, I missed my connecting flight to Las Vegas. Luckily the airline had updated their offices in Atlanta (guess they have to) and all of us were rebooked on later flights. However, because Sunday is apparently a popular day for travelling in the US, and Vegas is a popular destination, the earliest flight I could be booked on was at 13h30. We arrived in Atlanta at 08h45(ish). So I had to navigate this foreign airport in a foreign country all by myself, and then sit and wait for almost 5 hours for a flight. Amazingly, I didn’t get lost, and I found the boarding gate in this massive airport, and even managed to locate the smoking lounge and a shop where I bought a bottle of Coke.

But, by this time I was exhausted. I was uncomfortable on the flight to Atlanta, and didn’t sleep a wink, so by the time I boarded the plane to Vegas, I was bordering on delusional. And by the time I booked into my hotel, I was completely and utterly miserable. Luckily the check-in went without a hitch and the staff were incredibly friendly – maybe they could see the crazy lurking in my eyes – but I was still ready to just pack it up and go home.

Vegas is an interesting place. It is not quite as big as I had thought, and it is (currently) not as hot as I thought it would be. But then you start walking around, and the picture changes a little. It is a city of paradoxes. It is described as a Disney land for adults, and yet every hotel/resort has attractions aimed at kids.

My colleague and I had some spare time this morning after registration before our first session, so we went for a quick walkabout. Here are some of the pictures I took: 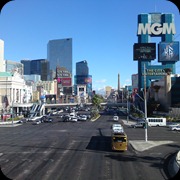 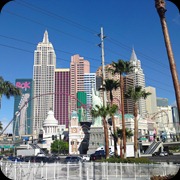 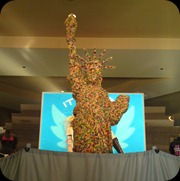 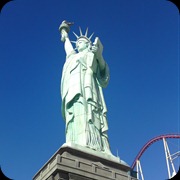 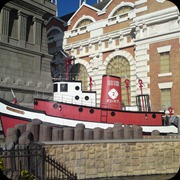 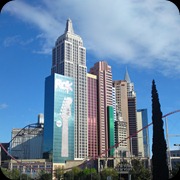 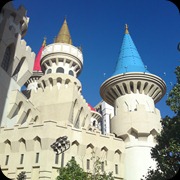 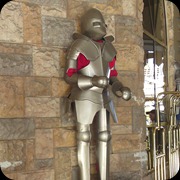 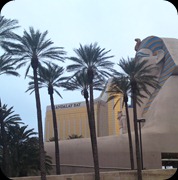 When I get home, I will compile the best photos from this trip and upload high-res ones to Picasa.

I finally got some good sleep last night, and got to speak to my family today, so I feel a lot better about the trip. The sessions I attended today were great (check my tech blog for possible posts about the sessions themselves), so all is right in the world again. I am not going to start making soap, don a aligator tail and trash my hotel room or start any kind of club where the first rule states that you’re not allowed to talk about the club.

I just have one question: why is it just about impossible to buy Coke in Vegas?