Should we worry now? 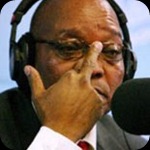 There have been a couple of bills passed recently, and even more proposed, that has many of us worried about the future of some of our freedoms, especially that of the media. And young Mr Malema has also had his fair bit to say about the media and the need to control it.

And then, today, this happened:

Sunday Times journalist Mzilikazi wa Afrika was arrested this morning at the newspaper's offices in Rosebank for being in possession of an allegedly fraudulent resignation letter. The arrest coincided with a meeting of journalists and editors about threats to media freedom in South Africa, reports Times Live.

Lawyers say wa Afrika was arrested for possession of what police claim is a fraudulent letter of resignation from Mpumalanga premier David Dabede Mabuza to President Jacob Zuma.

Wa Afrika was seized by police who became involved in a screaming match with senior editors about whether photographers could take pictures.

Here is the video from Zoopy:

Funny how new pigs always revert back to the ways of the old pigs. I think it is time for us to stop them, before we revert completely to the paranoid SA of the 80s.

I don't know. Are you worried?

I am very worried.