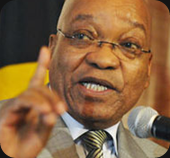 Zuma also said the government did not lack money or skills but rather faced "a crisis of accountability", which is why potholes remained unfilled, schools remained without windows and hospitals without medicines.
"The administrative systems that exist in government are worse than any other in the world," Zuma said.
Looking forward to South Africa's celebration of 20 years of freedom in four years' time, he said apartheid could no longer be blamed "if children still study under trees, if hospitals and schools are falling apart, and if there are still thousands who live in abject poverty".
He said a "drastic change" was needed.
"In some of our front and back offices are employed men and women who do not respect the jobs they are employed in or the citizens they are appointed to perform," he said.
He said government managers should "be visible on the ground from time to time and not be completely desk-bound" so that they could see where people lived and what their concerns were.
Zuma said, to applause, inefficient public servants who failed to improve "should be encouraged to leave".

Let’s see what comes from this.

tags: africa, in the news, politics