Stuff that I have been working on

Been hectically busy recently, hence the lack of activity here. I have been working on a couple of SCOM projects, mostly, with the following:

Unix/Linux agents: The Unix agents were mostly Solaris, so once we got the first one in, the rest were easy. When I got stuck, the following blogs were great:

The linux agents area little more complicated, because they are running CentOS (not currently supported in SCOM) and is still in progress.

System Center Virtual Machine Manager integration: This we did to enable SCOM to monitor the VMWare environments for our customers. Simple, easy and straight forward, providing your install media is not corrupt (as ours was in the one instance).

I have also been building web dashboards, much against best practise, to display pie charts and so on from SCOM. 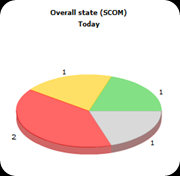 The current dashboard I am working displays an overall state from SCOM, machines not reporting, machines with disk space issues, patch compliance from SCCM and AV compliance from McAfee. Most of this is functional now, but I am suddenly needing to learn SCCM, which has also proven interesting.

I used the free components from Fusion Charts for building the graphs, which made life very easy for me. The pie chart here is a FusionChart that displays the overall state from SCOM in my home environment.