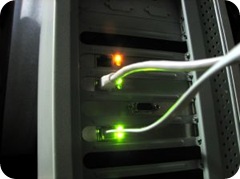 After being offline for a week (due to the demise of my laptop), I am playing catchup :)

We have just (finally) started out SCOM migration project, so I am collecting a variety of links around SCOM and, in particular, 2008 Server. The 2008 component is there because our architect designed our deployment on 2008.

So, Aidan Finn has a great entry on Installing An OpsMgr 2008 Agent on Windows Server 2008.

Then, I sat through a great presentation on Friday by the AVICode guys, who were incredibly patient with me, on their .Net and Biztalk management packs. I was honestly impressed by the product, and sincerely hope I can convince the powers that control the wallet that this would bring great benefit in the environment.

We have also had a look at a couple of other management packs, and another one we would very much like to implement is the Secure Vantage mps, especially the Group Policy and Security Auditing mps.

This week, we will be preparing the lab for the SCOM lab deployment, so within a week or so, I will probably know what issues one may expect attempting to deploy the SCOM server components on Windows 2008. I know I have had some issues in my home lab - such as, it refuses to install completely, despite applying all suggested hotfixes, detecting the operating system as Windows Vista. But I am always open to be proven wrong :)