We headed off recently to a family fun day hosted by the company I work for. 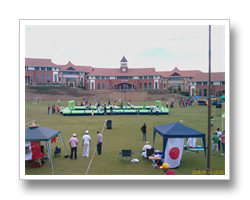 The company was divided into teams, we were in Team Japan. Each team had to participate in a couple of football matches and some giant foosball matches. The teams were also given budget to decorate their stand and serve food to the members of the team. Teams collected beads for every game won.

The teams were also judged on the presentation of the stand and the food served, and beads were allocated accordingly. 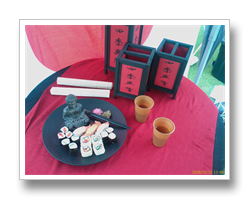 We served the judges sushi (which I did not buy from Woolworths on my way to the event, but spent the entire evening hand-rolling, I promise).

The teams were also able to collect extra credits (beads) for feeding and relieving the thirst of the officials, etc.

Team Japan won! Not because we won every game. Or even because our food was best, but because of extra credits :)