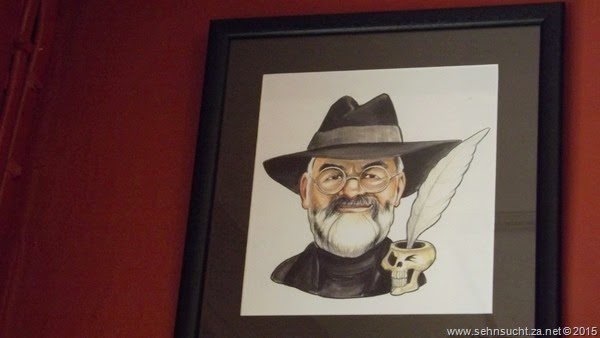 This week, my most beloved author, Sir Terry Pratchett, passed away.

I was a voracious reader as a teenager, and read just about every book in our public library by the time I was 16. When I asked the librarian for suggestions, she handed me Pyramids, which I devoured in a few hours and returned for more.

When my daughter was a baby, I took her to a local mall one day (just to get out of the house). While walking around, I noticed a sign on one of the bookshops advertising a book signing by none other than Mr Pratchett (he wasn’t a sir quite yet then) for 2pm that afternoon. I bought some of his books not yet in my collection, patiently waited until 2pm and for 1 brief minute got to spend time in his presence while he signed books for me. They are my most treasured possessions.

No other writer has influenced how I see the world as much as Sir Pterry. He will live on in his writing.

(This picture was taken at the Discworld Emporium during our visit in July 2013.)