So much has has happened since my last update on our little building project, so today you are getting a big update, with headings and everything. Because, yes, we are now at about 50% of the build!

The wall is a glorious, magnificent beast that is now waiting for a couple of coats of paint. 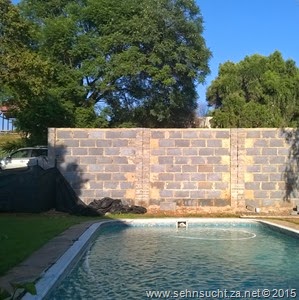 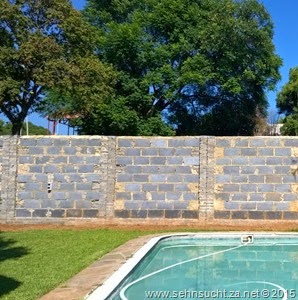 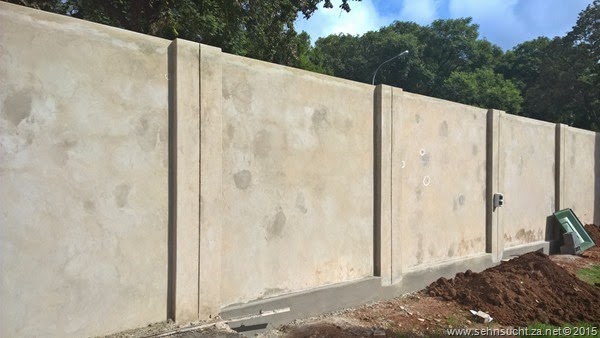 Painting should hopefully happen over the next week or so.

The laundry is a beautiful, 100% completed sunflower

that is functional and ready for use. I have even been doing laundry just to celebrate. 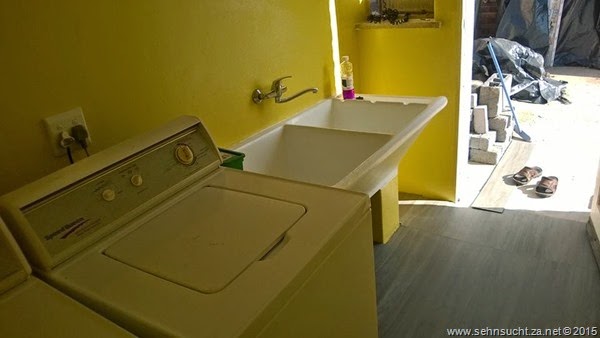 Our new on-suite bathroom is in progress, finally. After breaking down, many, many walls inside the house to accommodate the new shape of everything, the guys started building the curved wall that gives our bathroom shape. The other side of the wall facing the rest of the house will be the new spine of the house and hopefully one day, host a glorious curved bookshelf. 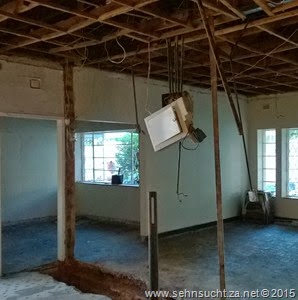 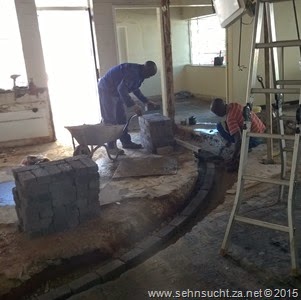 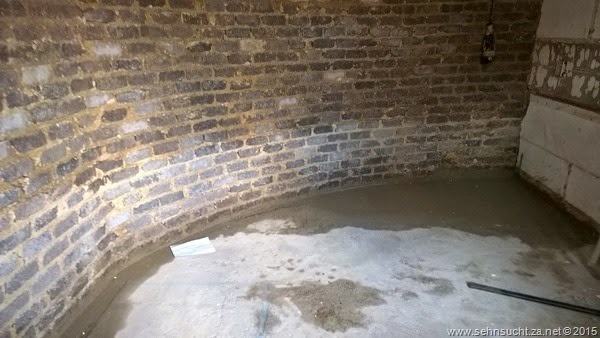 My new bath has arrived, as well as the rest of the bathroom fittings (taps, tiles, shower, etc). They have also installed the bulk of the plumbing and built the shape for the window. 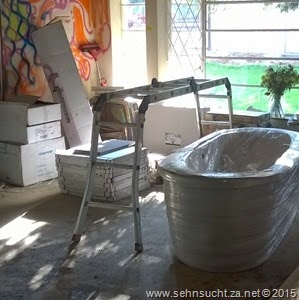 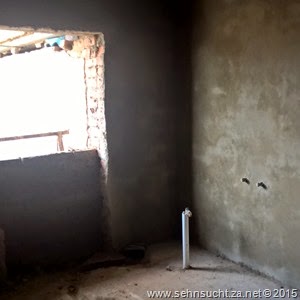 They will hopefully complete the plumbing today, and install the window early this coming week. Then they can assemble the bathroom. We should have a functional bathroom in about two weeks from now.

Our front door was removed this week, as well as the window and the rest of the wall, to prepare for our new front door. 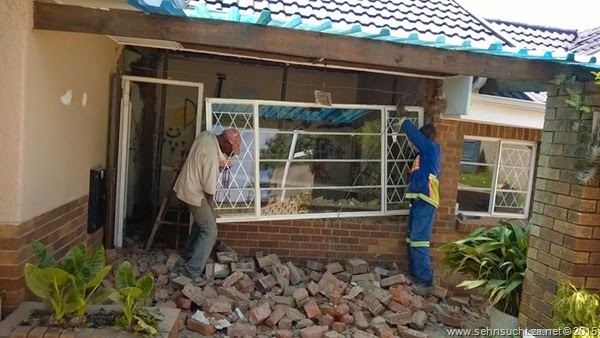 This is our front door at the moment. 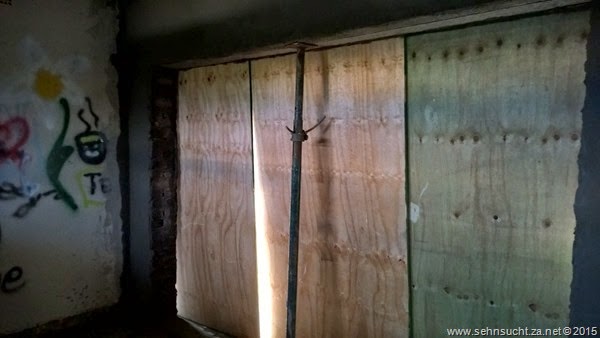 Our new door should arrive in this week.

The kitchen will be done last. This was always the plan, but the plan also included a ready new kitchen to be installed as soon as the major construction has been completed. This is no longer the case.

When we applied for the extended loan from the bank to finance this project, we included the quotes from both the contractor and the kitchen company we had chosen at the time. The full amount (with a little extra) was approved by the bank on condition that it is a building loan, rather than a normal bond extension. This means that the bank controls the payments, thus placing some of the risk on the contractor too. This was fine and acceptable, except that we needed the kitchen company to be paid a deposit on confirmation of order. Bank didn’t think this would be much of a problem.

The original quote for the kitchen from the kitchen company was R170k, of which R88k would be a deposit. When the construction started, we decided to just contact the kitchen company again to see if quote is still valid and may we go ahead, and discovered that the sales person we dealt with no longer worked for the company, and did not process our quotes into their systems. They didn’t know about us.

They were happy to come out and requote, which they did. New quote is R190k, of which R95k would be a deposit. My heart stopped a little bit, as the original price was already more than I was comfortable with, but we took the quote and requested the payment of the deposit from the bank. To discover that the bank is not willing to pay deposit. After much crying, gnashing of teeth and looking at things from a different perspective, we cancelled the order with the kitchen company and decided we will relook it once the construction has been completed.

This is what our kitchen looks like most days. 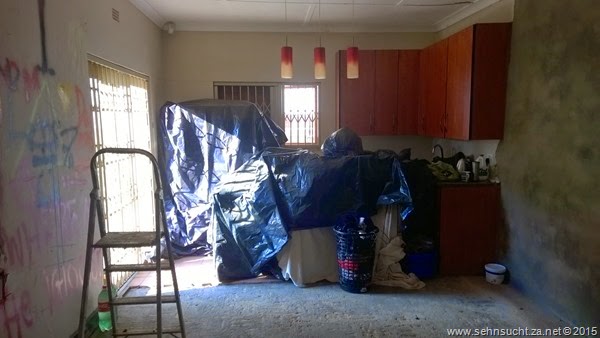 The biggest change to the kitchen right recently was the bricking up of the window and door. 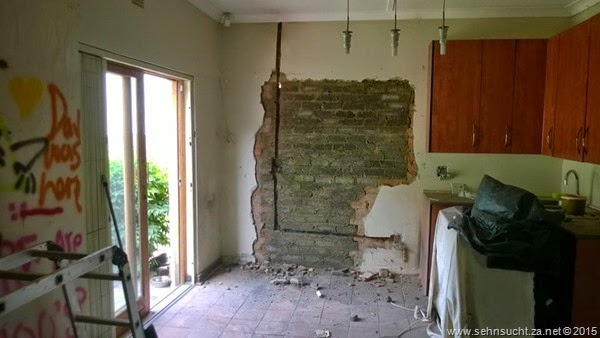 This has now been plastered too, and the electrical wiring has been laid.

The rest of the house

We can really start getting a feel for the space of the house now, and I dream about the bookshelves every time I look at the curved wall. 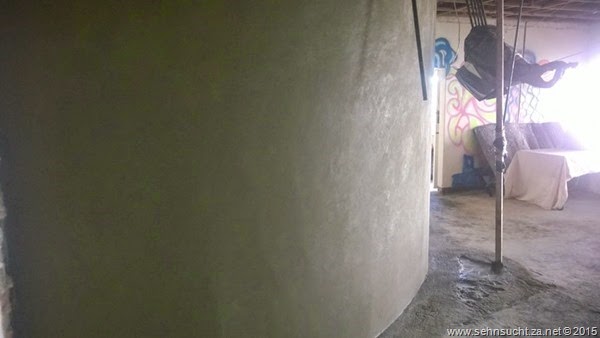 Expected work to be done in the next two weeks includes:

Living in the house while all this work is going on is not easy. Every single thing we have is covered in dust and it feels like all we do is clean. As soon as the builders leave site in the afternoons, normally around 6pm, we start cleaning and it often takes us around 90 minutes to at least return the house into a state where we can breathe. Some days are better than others.

The husband has also been working from home most days to oversee what’s happening. Because he is a bit of a control freak, he tends to get involved and he’s been trying to manage the build much more than he should. This has been placing an immense amount of strain on him, to the point where I am now forcing him to take time-outs and play Xbox games.

Can't wait to see it all completed! I really, really hope the kitchen gets all sorted out.