While I’ve had some issues scrobbling, both on Android and on Windows, I think this is a fair representation of what I listened to during 2012: 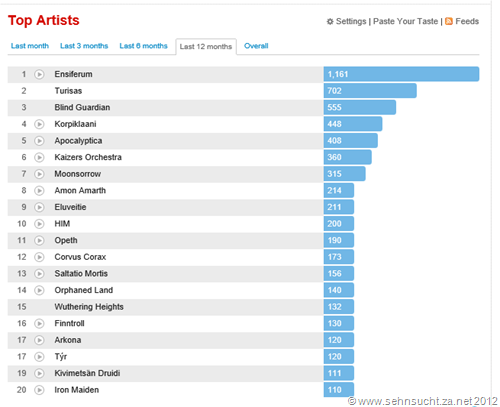 Battle/Pagan metal still features heavily, with a couple of new comers and a couple of old favourites.

Some of my favourite new releases for 2012:

Clearly, the world needs to polka

Hard to choose a favourite from these guys, but this one is right up there. Go check out their Youtube channel for lots more awesomeness.

While I did technically discover them in 2011, I didn’t really listen to them or fall in love with them until 2012. I am so happy that I will get to see them live at Wacken next year.

As with Subway to Sally, this was really the year I started listening to Corvus Corax. Also very happy that I will get to see them at Wacken next year.

New local band, I expect big things from them.

I didn’t get to see any bands live this yeae, but next year we will be attending the Metallica concert, and, of course, Wacken

tags: Music, the silliness of me