Sentimental Sunday: Jethro Tull – The Hare Who Lost His Spectacles

I have really been enjoying my recent trips down musical memory lane to the point where I will now, during the week, think about my next trip. This week, I was going to focus on Jethro Tull’s Stormwatch*, but while looking for a video this morning on YouTube, I came across this forgotten favourite from my childhood.

I think, by now, it is no secret that I am absolutely and utterly in love with Alice in Wonderland, and as a young girl, this interlude in The Passion Play transported me down the rabbit hole to Wonderland. Listening to it now, all these years later, I still feel like I need to follow a rabbit.

Owl loved to rest quietly whilst no one was watching. Sitting on a fence one day, he was surprised when suddenly a kangaroo ran close by. Now this may not seem strange, but when owl overheard kangaroo whisper to no one in particular,
``The hare has lost his spectacles" Well, he began to wonder.
Presently, the moon appeared from behind a cloud and there, lying on the grass was hare. in the stream that flowed by the grass -- a newt. And sitting astride a twig of a bush -- a bee.
Ostensibly motionless, the hare was trembling with excitement, for without his spectacles he was completely helpless. Where were his spectacles? Could someone have stolen them? Had he mislaid them? What was he to do?
Bee wanted to help, and thinking he had the answer began:
``You probably ate them thinking they were a carrot".
``No! interrupted owl, who was wise. ``i have good eye-sight, insight, and foresight. How could an intelligent hare make such a silly mistake?
But all this time, owl had been sitting on the fence, Scowling!
Kangaroo were hopping mad at this sort of talk. She thought herself far superior in intelligence to the others. She was their leader; their guru. She had the answer:
``Hare, you must go in search of the Optician".
But then she realized that hare was completely helpless without his spectacles. and so, kangaroo loudly proclaimed,
``I cant send hare in search of anything!
``You can guru, you can!" shouted Newt. ``You can send him with owl".
But owl had gone to sleep. Newt knew too much to be stopped by so small a problem -- ``You can take him in your pouch". But alas, Hare as much too big to fit into Kangaroos pouch.
All this time, it had been quite plain to hare that the others knew nothing about spectacles. As for all their tempting ideas, well Hare didn't care. The lost spectacles were his own affair. And after all, Hare did have a spare a-pair.
A-pair.

* I always remember Stormwatch, not for the music but for the cover. As a 3 or 4 year old, there was nothing that scared me as much as this cover: 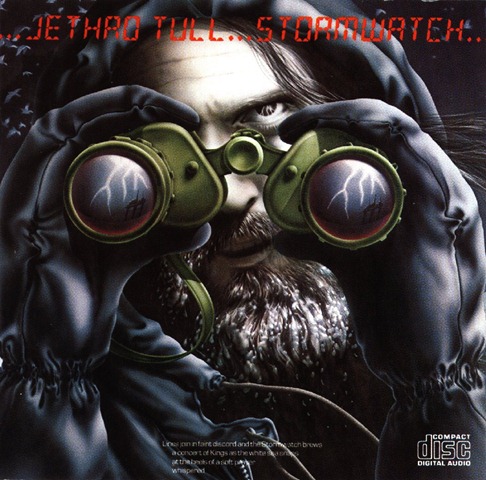 I remember always running past, and checking if the lightning was still flashing in the visible eye. Just to make sure.

I love Jethro Tull. Strangely, I'd not heard of this song before though!!

Oh Emm, you should really give the whole album a listen, it has always been one of my favourites :D