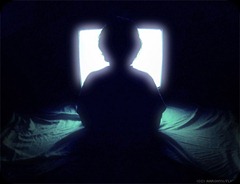 It happens, every now and again, that somewhere in conversation I may mention that we do not own a television set. This, of course, means that we do not really watch TV. And generally the response is ‘Oh, my god, how do you live?’ as if there is no life without TV.

The reality is that we live quite happily. We control what we watch and when we watch it and how much we watch. We, as a family, also spend an enormous amount of time doing other things, like gardening, reading, chatting and laughing. And yes, we do watch things, but it is controlled, and it is our choice. But whenever I have this discussion, I cannot help but recall the song by Disposable Heroes Of Hiphoprisy that sums up my feelings about TV in general perfectly, lyrics as follows:

[chorus:]
Television, the drug of the Nation
Breeding ignorance and feeding radiation
(2x)

T.V., it
satellite links
our United States of Unconsciousness
Apathetic therapeutic and extremely addictive
The methadone metronome pumping out
150 channels 24 hours a day
you can flip through all of them
and still there's nothing worth watching
T.V. is the reason why less than 10 per cent of our
Nation reads books daily
Why most people think Central Amerika
means Kansas
Socialism means unamerican
and Apartheid is a new headache remedy
absorbed in it's world it's so hard to find us
It shapes our mind the most
maybe the mother of our Nation
should remind us
that we're sitting too close to...

T.V. is
the stomping ground for political candidates
Where bears in the woods
are chased by Grecian Formula'd
bald eagles
T.V. is mechanized politic's
remote control over the masses
co-sponsored by environmentally safe gases
watch for the PBS special
It's the perpetuation of the two party system
where image takes precedence over wisdom
Where sound bite politics are served to
the fastfood culture
Where straight teeth in your mouth
are more important than the words
that come out of it
Race baiting is the way to get selected
Willie Horton or
Will he not get elected on...

T.V., is it the reflector or the director?
Does it imitate us
or do we imitate it
because a child watches 1500 murders before he's
twelve years old and we wonder why we've created
a Jason generation that learns to laugh
rather than to abhor the horror
T.V. is the place where
armchair generals and quarterbacks can
experience first hand
the excitement of warfare
as the theme song is sung in the background
Sugar sweet sitcoms
that leave us with a bad actor taste while
pop stars metamorphosize into soda pop stars
You saw the video
You heard the soundtrack
Well now go buy the soft drink
Well, the onla cola that I support
would be a union C.O.L.A.(Cost Of Living Allowance)
On television

Back again, "New and improved"
We return to our irregularly programmed schedule
hidden cleverly between heavy breasted
beer and car commercials
CNNESPNABCTNT but mostly B.S.
Where oxymoronic language like
"virtually spotless", "fresh frozen"
"light yet filling" and "military intelligence"
have become standard
T.V. is the place where phrases are redefined
like "recession" to "necessary downturn"
"Crude oil" on a beach to "mousse"
"Civilian death" to "collateral damages"
and being killed by your own Army
is now called "friendly fire"
T.V. is the place where the pursuit
of happiness has become the pursuit of
trivia
Where toothpaste and cars have become
sex objects
Where imagination is sucked out of children
by a cathode ray nipple
T.V. is the only wet nurse
that would create a cripple

[Chorus:]
Television, the drug of the Nation
Breeding ignorance and feeding radiation
(4x)

~ Television The Drug of the Nation by Disposable Heroes Of Hiphoprisy

I must admit, I can quite happily live without TV... I much prefer the sound of silence... books... laughter.

Off course there are things I like watching, but I take them or leave them really.

Hmmm, I can't quite comment on this seeing as TV is my biggest pleasure in life. I could live without an actual television though as I watch 90% of my shows off the PVR or on my laptop.

I do imagine that my house would be a very different place if I had sprogs.

I don't watch much TV, there are some series we record, and I love my F1, but the thing being off doesn't bug me at all.

We do have a TV, but no aerial and certainly no dish, so we literally only watch DVDs from time to time. And it's great. My kids spend most of their free time outdoors in the fresh air and sunshine. It's awesome.
And, as some of the ladies at the Blogging Chicks get-together noted, hubby and I spend a lot more time together than we otherwise would... ;-P

@Emm: There are things I love watching too, but I prefer having the choice of what I watch and when. It is more the concept of having to sit in front of a screen where you simply absorb what is being thrown at you that I have a problem with. And you do do other things too :)

@Angel: I think you probably do a lot of other things too :)