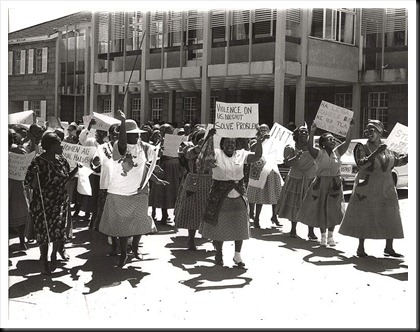 On August 9, 1956, 20,000 women staged a march on the Union Buildings in Pretoria to protest against the proposed amendments to the Urban Areas Act (commonly known as the pass laws) of 1950. They left bundles of petitions containing more than 100,000 signatures at prime minister J.G. Strijdom's office door.

Outside they stood silently for 30 minutes, many with their children on their backs. Those who were working for whites as nannies were carrying their white charges with them. The women sang a protest song that was composed in honour of the occasion: Wathint'Abafazi Wathint'imbokodo! (Now you have touched the women, you have struck a rock.). In the 54 years since, the phrase (or its latest incarnation: "you strike a woman, you strike a rock") has come to represent women's courage and strength in South Africa.

Sadly, 53 years later in 2009, things are not much better for women in South Africa. While women do have the right to vote, own property, have ‘high’ jobs, etc., abuse is still rife and women are often victims of violent crimes. Let us hope that it doesn’t take another 50 years to eradicate the violence.

tags: A thing of beauty, africa, Love this place, politics, the world out there, thoughts