“The shepherd drives the wolf from the sheep's throat, for which the sheep thanks the shepherd as his liberator, while the wolf denounces him for the same act as the destroyer of liberty.” 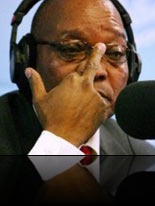 The NPA have dropped all charges (all 700-odd of them) against Jacob Zuma, not because he was found to be innocent, but because of an abuse of process by Leonard McCarthy. Full statement here.

I must emphasise that this does not mean that Jacob Zuma is innocent.

What this does mean that we will have a criminal for a president after the 22 April elections – only 15 days from now. This is a sad day for liberty, justice and democracy.

The decision to withdraw the charges does not appear to be rationally connected to the information before the National Director of Public Prosecutions (NDPP).  All indications are that the NDPP has not taken a decision based in law, but that it has buckled to political pressure. Two weeks before the election, it now portrays Jacob Zuma as a wronged victim in a show trial.

‘There are absolutely no legal reasons for the decision,’ says De Lille
ID President Patricia de Lille says she is ‘very, very angry that the NPA has not provided any substantive legal reasons for withdrawing the fraud, corruption, racketeering and tax evasion charges against ANC President Jacob Zuma.
‘The first casualty of this decision today is the principle that we are all equal before the law.
‘The NPA has got absolutely no right to drop the charges against Jacob Zuma before they have been tested in an open court of law,’ Ms De Lille says.
‘The fact that the tapes are legitimate is completely irrelevant to the Zuma case. The NPA must charge Bulelani Ngcuka, Leonard McCarthy and anyone else on the tapes for interfering in the independence of the NPA.
The ID Leader, the 1st of over 200 prospective witnesses in the Zuma case, says ‘the case against Zuma should have gone on uninterrupted.
‘The fact that these allegations of interference will be tested by the courts, but the Zuma case will not, means that the leadership of the NPA has replaced their loyalty to Thabo Mbeki with a new loyalty to Jacob Zuma.
‘The ANC has betrayed the visions, values and ideals of our Constitutional democracy and of the struggle we fought against Apartheid,’ De Lille says.
‘Ten years of hard work by whistleblowers, the media and the prosecuting team, all of whom were guided by the principle of equality before the law, have gone down the drain.
‘It is wrong that the ANC has been allowed by the NPA, which should be independent, to dictate to it what is in the best interests of our democracy,’ De Lille says.
‘This is an extremely sad day for me and for our country. We can only hope and pray that our people will eventually realize that the ANC leadership is motivated by self-interest, greed and dishonesty.
‘I am deeply concerned for our future for as long as these ANC crooks are in control of our country,’ says De Lille

The Congress of the People wishes to register its disappointment at the political decision of the NPA to drop the corruption, fraud and racketeering charges against the president of the ANC. We condemn in the strongest possible terms the manner in which this matter was handled.
The NPA’s decision to drop the charges against Jacob Zuma does not safeguard justice, due process or equality before the law. Instead, it guarantees that the president of the African National Congress, and the party’s presidential candidate, will forever be branded a criminal suspect in the eyes of much of the nation and the world. This decision is a blow to our democracy that will be felt for years to come. The NPA in this act, has undermined the Constitution and itself as an entity.

Is this the end of the Mandela beacon of hope? We can only hope and pray that the rest of the people in this beautiful country of ours will wake up before the elections and make the right decision to not put a criminal in power. Or at least to ensure the ANC does not have a 2/3 majority. But, after this decision, it looks like the road we find ourselves on was built by Robert Mugabe rather than Nelson Mandela.

“For to be free is not merely to cast off one's chains, but to live in a way that respects and enhances the freedom of others.”

This quote is widely inaccurately attributed to Nelson Mandela when in fact it is a quote from Marianne Williamson. See the Nelson Mandela Foundation reference:
ndela.org/index.php/news/article/deepest_fear_quote_not_mr_mandelas/