So, where to now? 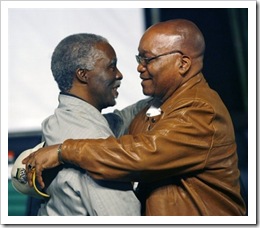 Jacob Zuma is a populist, and will tell anyone exactly what he thinks they want to hear, simply to promote his own personality, that has almost become a brand to itself. And the ANC very clearly supports this. And, while I agree that Mbeki has not been good for the country generally speaking, I fear that, should Zuma become president, things will become far worse.

SA Bookworm wrote a great post during this week highlighting the development of neo-Stalinistic tendencies in our country. It struck a chord.

Stalinism is the political regime named after Joseph Stalin, leader of the Soviet Union from 1929–1953. It includes an extensive use of propaganda to establish a personality cult around an absolute dictator, as well as extensive use of the secret police to maintain social submission and silence political dissent.

As unrealistic as it may sound, I think the only path forward would be to start over, clean slate. Neither Mbeki nor Zuma sitting at the head of the table, but rather someone who has not been involved with this at all.

My initial instinct would be someone like Tokio Sexwale, but I am no longer sure he marches to the right drum either. We need someone straight-laced and trust-worthy, who would put the law and the good of the country above his own agenda and wallet. Maybe Tokio is that man, maybe it is someone else. But this circus cannot continue.

But, at the end of the day, what I want is of no consequence, because the ANC will forge ahead with their own agenda, while the country suffers in silent fear.

I leave you with these last thoughts:

Whenever a separation is made between liberty and justice, neither, in my opinion, is safe.
~ Edmund Burke