I have the need 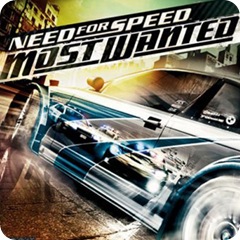 I am not a big gamer. No, seriously. Doh.

I will play a spot of Age of Empires every now and again, and I am addicted to Caesar III, when I can spare a couple of hours. The husband, on the other hand, is a complete games addict, and even managed to convince me that we needed an Xbox 360.

And he is a driving game addict. So i have sat through hours and hours of cars going whrooooom whroooooom as he played Need for Speed, Grid and many, many other racing sims.

Ok, so apart from the fact that the graphics are a little dated, when compared with those of Grid and Forza, this is a fun game.

I have already started climbing the black list ladder, and no longer drive straight into walls - and, considering I don’t drive in real life, this is quite a feat for me. I have had some fun evading the cops so far too, but, as a parent, kinda feel bad for enjoying it as much as I do.

I have set myself a new challenge. I would like to become such a good driver that I can whip my husband’s ass. He’s only been playing driving sims for around 8 years – I recon by the time I get to the top of the blacklist, I should be able to do it, right?

But, finally, I understand this need…

(and, at least, finally, I am playing games that were made this century *grin*)