Quote of the day:
He may be mad, but there's method in his madness. There nearly always is method in madness. It's what drives men mad, being methodical. 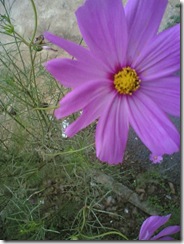 Now that I have finished celebrating yesterday’s little word-count victory, I can set the target for the next week.

The final target for the novel is around 60k, which means I have another 18k to write. I can do this in 3 weeks, at 6k a week. I am going on conference from the 3rd of August (non-writing related), which is just over 3 weeks away, forcing me to keep to this deadline. The weather is also forcing me indoors, so the only distraction will be the interwebs.

Of course, I would like to write more than 6k a week, but I think I should be realistic, and stick to that as a target, especially considering I am also supposed to be writing an exam in the next week or two. However, most of the last couple of chapters have already been written, and it is a matter of polishing and tying up loose ends, etc. so it is well within my reach to do more than 6k a week. But I will stick to a 6k target, and score extra points (in my own book) if I manage more than that *smile*

I would also, if possible, achieve my word count targets while consuming less chocolate. Gah! What am I saying? More chocolate, not less!

What fuels you while you write? Are you a chocolate fiend, caffeine addict, or is there something else that keeps you going?

I love coffee, I love tea... I recall a children's ditty about this. Chocolate is good too, but my waistline won't allow more than a tiny nibble.

Congratulations on your excellent progress. You deserve to feel elated.

BTW, the graphics add such a nice touch to your posts. It all looks so elegant, words and pictures together.

@Ritergal: thank you so much. Your words of encouragement has also contributed greatly to my progress recently.
And thank you.

You mean people write without caffeine and chocolate?

Good job -- your site is beautiful and you're really accomplishing a lot.