Quote of the Day:
Copy from one, it's plagiarism; copy from two, it's research.
--Wilson Mizner 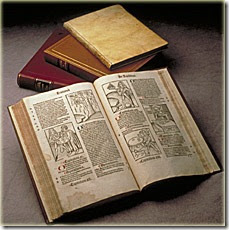 I have to be honest, I really love the feel of paper under my fingers when I read. I love the smell of old books, and the rustling of the pages. And there is nothing like curling up around a book in bed on a rainy (or sunny) day.

But the idea of a digital book (for the lack of a better word) is also appealing, mostly because it gives on the ability to carry many books in a small space.

Of course, the first point every one raises these days in this kind of discussion is the environmental one. The printing industry, apparently, takes a toll on the environment. Or, at least, this is the immediate assumption. I mean, paper comes from trees, right? Unfortunately, I could find just about nothing to substantiate this claim - in fact, the only article I could find that remotely relates to this topic was this one from sustainablog. But, as someone who kinda likes living on this planet, I would still like to reduce my overall footprint, which means I have to look at every aspect of my lifestyle.

When going digital, there are several options. Of course, using a computer to read an electronic book is the first option - mainly because I already have the computer and do everything else with it. But a computer is not really that easy to curl up around, and even a laptop has a limited battery life, making it impractical for longer journeys without power on hand. My cell phone gets good battery life, but the screen is a little small.

The other option is a e-paper device. Wikipedia defines e-paper as follows:

Electronic paper, also called e-paper, is a display technology designed to mimic the appearance of ordinary ink on paper. Unlike a conventional flat panel display, which uses a backlight to illuminate its pixels, electronic paper reflects light like ordinary paper and is capable of holding text and images indefinitely without drawing electricity, while allowing the image to be changed later.

There are a couple of these devices on the market already. Unfortunately, I have not been able to acquire one, so my comments are based purely on my research into the topic. But I have to note that this research is what I will base my final decision to purchase on. 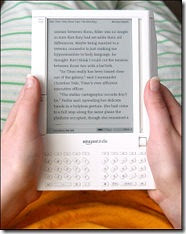 My score rating is out of 5, and will consider appearance, usability, features, availability and size.

The first, most-hyped is, of course, the Kindle from Amazon. I love the idea of the Kindle, but, to be honest, it is ugly. But, it comes with some funky features, such as wireless access, email, adjustable text size and access to Wikipedia as well as a host of other publications. But it is ugly. Big strike in my book. It runs on Linux, but does not need a PC connection (apparently) so there is no concern around cross-platform compatibility. The Kindle is not currently available outside the US. Retail price is $359 from Amazon. My score: ♥♥♥ 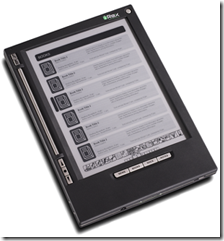 Which brings me to the iLiad. Visually, it is far more appealing than the Kindle, which scores in my book. It has similar features to the Kindle, but has a bigger screen - always a plus - and the screen is pen-enabled, allowing one to also use this device as a notebook/sketchpad. The iLiad also runs on a Linux platform, and there are apparently a couple of bugs with it, but, again it doesn't appear to require a PC connection, so the cross-platform concerns also are not an issue. There are a number of retailers outside the US that sells the iLiad. Retail price is $699 at http://www.ereaderoutfitters.com/. My score: ♥♥♥

The Sony Reader looks like it is a combo of the iLiad and the Kindle, but it is still prettier than the Kindle.

Appearance wise, it has the advantage of looking more like a book, making it easier to imagine curling up in bed with it. The features are much of a muchness when compared to the iLiad and the Kindle, the only glaring difference being the ability to listen to DRM-free audiobooks. The Reader, however, is not officially supported on Mac OS X or Linux, despite running on a Linux platform, but syncs effortlessly with Windows systems using an app similar to iTunes. It is currently only available in the US and Canada, retail price is $299 at Sony Style. My score: ♥♥♥½ 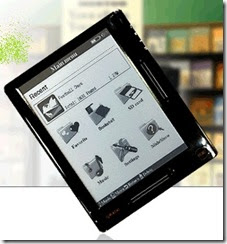 The last one I want to look at is the Mentor from Astak. Specifically, I am looking at the 9.7" reader, because of the bigger screen size. I like the appearance of this device, despite the manufacturer's sub-standard web site. The differentiator on this device is its platform, because the Mentor runs on Windows CE. As a Microsoft baby myself, this counts in its favour, because I know it will integrate easily into the rest of my network and devices. It would seem that it will only be available from October 2008, but is set to come in at a retail price of around $350 for the 9.7" version, while the 5" version is set to retail at $159, making it the cheapest reader on the market. My score: ♥♥♥¾

If I had to build a reader, it would have all the standard features (Wi-fi, bluetooth, stereo audio, large screen) but it would also consider appearance, would run on the Windows platform (for interoperability in my own life), have the ability to be skinned, will have touch screen and possibly some integration with Office and Windows Live. It would be great if I can blog from it too, but that is not a deal-breaker.

Question: So, what do you think? Will books as we know (and love) die out, and, instead of having beautiful libraries in our homes, we will all just carry a reader? How do you feel about e-paper?

I like the Mentor one best, though the Sony Reader looks nice and gives you the feel you're looking for.

Now if you can edit the file and fix the OCR (?) nonsense at the same time, then I'd be happy.

But I still like my paper library. Buuut... I could be persuaded to fork out $350 for the Mentor :)