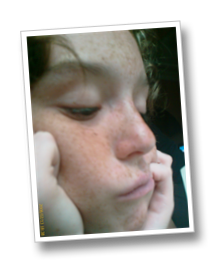 It is the last week-end of Sinead's holidays. Tomorrow she returns to school for the second term (under much duress). While she misses spending time with others her own age, she is not too happy with the idea of having to get up early again. I am sure, though, that by the end of this week, she will be happily back into the swing of things.

Sinead went ice skating with some friends yesterday, which, according to her, was great fun. I actually wish there was an ice rink closer to home, so we can do it more often. Sinead seems to thoroughly enjoy ice skating, and both Quentin and I enjoyed it when we were younger. Although, I have to be honest with myself and admit that I haven't been on the ice for a good 18 years, so I may no longer be able to glide gracefully across the ice as much as I would sit on it.

Last night, we had some friends over for dinner. The veggies (as they are affectionately known) cooked us a killer vegetarian curry, and I made a Sago pudding for dessert, while Quentin made mushroom fritters for starters.

The wine flowed generously, unlocking the laughs and loosening the tongues. It is nice to be able to take some time out from the realities of our lives with these moments - I just always wish it was possible to do it without needing social lubricant.

This is comfort food at its best, apparently :)

I broke up some cashew, Brazilian and almond nuts and stirred it into the mixture before baking. The cashews and Brazilians went a little soggy, but the almonds stayed crunchy, adding a nice surprising texture to this otherwise soft pudding. You may also stir in raisins, and I think dried apricot could also work well.